A summary of the events of York International Women’s Week by Rose Drew:

“This past summer, members of our organisation, York International Women’s Festival discussed how best to commemorate the UN Day for Elimination of Violence Against Women on November 25. I recalled how my daughter, who is mildly autistic, loved the Krav Maga lessons she took a few years back and how well she understood the instructions. Emily felt the Krav system made her more confident. I figured, for the Violence Against Women (VAW) event, why not help women avoid violence? I applied for a grant from the council and was able to have Gheorghe Husar speak at our VAW event on the 25th, and to offer a free 2 hour beginners class. What a success! Our VAW event offered talks from women from India, Kyrgyzstan, and right here in York, with our local Ward councillor talking about how we can all make a difference in our own communities. Then Gheorghe of Spartans Academy gave an interesting and informative talk about self-protection. Three days later, on the 28th of November, Gheorghe came back to York and gave us an amazing 2 hour class. I was left a bit bruised, and also with a feeling of accomplishment: maybe if I was ever attacked, I might have some idea of what to do.

Gheorghe spoke with passion about self-defence and how Krav training can prepare someone for the unexpected. He is clearly comfortable in front of an audience, and invited questions.  Sometimes people don’t know what to ask! Gheorghe prompted us with ideas about situations we might face. Soon 5 or 6 women had questions and Gheorghe answered them with examples of what can happen, and how to best handle an attack. He also provided several real stories about how people handled real-life situations.

There is no way a single afternoon can prepare me for a night out that goes wrong, and even regular lessons are no absolute guarantee. But now everyone who attended this class has an idea of what Krav Maga is like, and just what we ourselves might be capable of: if we ever need it.  Thanks, Gheorghe and thanks to Spartans Academy.”

“What a fantastic session! Super instruction and a great workout. Feeling very positive and happy to have learned and developed new skills. Not wanting to have to practice them soon though! Thank you so much!” – Angela Milburn.

So what happened at Kings Manor on Wednesday 25th November?

At the Violence Against Women event, we heard speakers from the York Centre for Applied Human Rights, and domestic violence charity IDAS. Because the Krav Maga aspects of our two linked events depended on the successful Ward Grant funding, Guildhall Ward and our new Green Party Cllr Denise Craghill also spoke up about community involvement and the history of International Woman’s Day, now celebrated for nearly 105 years. 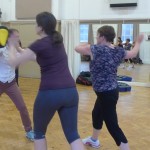 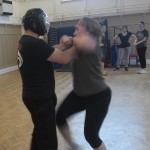 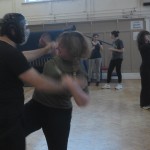 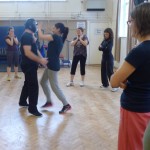 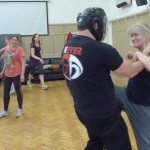 I was deeply impressed, and moved, by all the speakers. Brandy from IDAS was full of information; Bondita from India talked about rape and the dire influence on her country from being subjected to a military mentality for 60 years (trickle-down agression!), as well as the endemic patrimonial culture. Too, the lowest caste Dalits are often the targeted victims of sexual violence. Aida was fascinating, and frightening, in her illustrated talk about Kyrgyz bride-kidnapping. Juliana Mensah of York University’s Centre for Applied Human Rights created a looping powerpoint slide show comprised of images from both Aida’s and Bondita’s talk, as well as other Defenders images.

Finally, Gheorghe Husar of Spartans Academy gave us interesting overview of Krav Maga and we discussed instances of how one might be caught up in an attack– and how one may survive it. Or avoid it to start with! Thank you to all who attended, and also provided support for this event, especially Centre for Women’s Studies and the Centre for Applied Human Rights, both from York University; Spartans Academy; and the City of York Council Ward Grant system for enabling these two events to go forward.

“Congratulations on arranging and publicising this. Wow, so much we don’t know!”  — Frances-Mary Callan

If you missed out on this year’s Women’s Festival events: